There is no Dutch  James Bond Collectors Club  in the Netherlands.

The English club  is here only represented  by this contact
using the name:
De James Bond Collectors Club, afd. Ned. 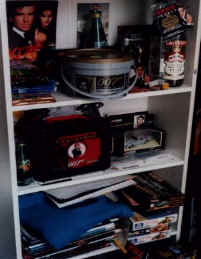 This site is the Dutch contact and is also a connection to the site and the club in England.

Using this site / the e-mailaddress  you can contact the Dutch connection.
Interested people, James Bond fans and collectors, but also business-like
interested people are  very much welcome on this site.

This site was made on 8 november 2002 and also went on-line on this date.
Her purpous is to inform people about the club and make it more easier for
Dutch people to gain a membership of the club, and ease the contact with the
club in England and also to improve the ways of contact between Dutch companies
and the club in England for both interest.  A james Bond collector is not just a fan,
but he collects (for ) a long time much material and is a certain obtainer for Bond
products ( mostly in a plural way). It is normal for us to see the film in the cinema
007 times..... A hobby with an adventure character.

If you want to obtain the last information about James Bond collection material,
you better switch to the website of the club in England.

Information about the club is to be found under the button" info club England".

Information about the  webmaster:

Ronald Cobet started collecting fotos and information concerning James Bond in the year 1968.
In these days there were not many things for sale or to obtain in the eastern part of Holland. (Westerbork)
Also the funds were low. Paste-on albums full of information give a nice view of this time.
In 1969 he had reached the age to drive a motorbicycle and to go to the cinema. So, he went to
"On her Majestys secret service". The impact of this movie was enormous. Heading back for home
after the film is was a thirty minutes drive with tears in the eyes  through the snowstorms from the
cinema to his hometown. Only years later his collection also started to contain other articles, such as
clothing, toys, special books etc. The collection grew and grew and in 1987 the late Simon van Collem
( who made wonderfull tv-reports about 007 in the Netherlands) mentioned in an article the new
James Bond Collectors Club in England. There started the correspondence with Simon and the subscription
with the club. After a while Ronald offered chairman Dave Worrall to collect things and products in the
Netherlands for the club, to be used for articles, shows, and to pass it through to members all over the word
and maybe contribute with written information. After a short while of habituation Dave decided to allow
Ronald to use the status of club representative in the Netherlands. This opened doors, gave much more information
and the honourable invitation of UIP to visit the Galapremiere of "Licence to Kill" in Amsterdam. Every not too young
fan will remember, that poor Simon van Collem died this very evening there on the job.

During very pleasant visits to Dave Worrall in England, also some setlocations were visited and also the
Pinewood Studios and shed 10 etc. Many companies were very kind to the club during the years and we published
nice articles about there products or sold many items to non-Dutch members. May thanks to UIP, Warner Home video,
the Dutch Telegraph newspaper, Philips, Heineken, Grolsch, publisher Luitingh-Sijthoff, Martini, EMI, Bruna,
the local cinema and shopkeepers and many others........... ( People who see this,did contribute and are not mentioned
and would like to be so, please give me an e-mail)

The collection grew and is at the moment shown in cabinets and because of problems with space "sleeping"in boxes.
In 1997 Ronald participated in the Heineken James Bond Quiz in Planet Hollywood in Amsterdam, where he entered the
finals and won the first prizes ! From the hands of Humberto Tan ( tv host) he received these prizes, amongst them a
beerbarrel, which was really used in the film, signed by Daphne Deckers. (sorry, no beer...)